We will be scrutinizing the past prices and market sentiment for Ripple, in order to formulate an XRP price prediction for February 2020.

In the latter part of January, the coin remained relatively stable, with minor price swings. From January 14th, XRP has been struggling to stabilize itself above the $0.24 resistance level. 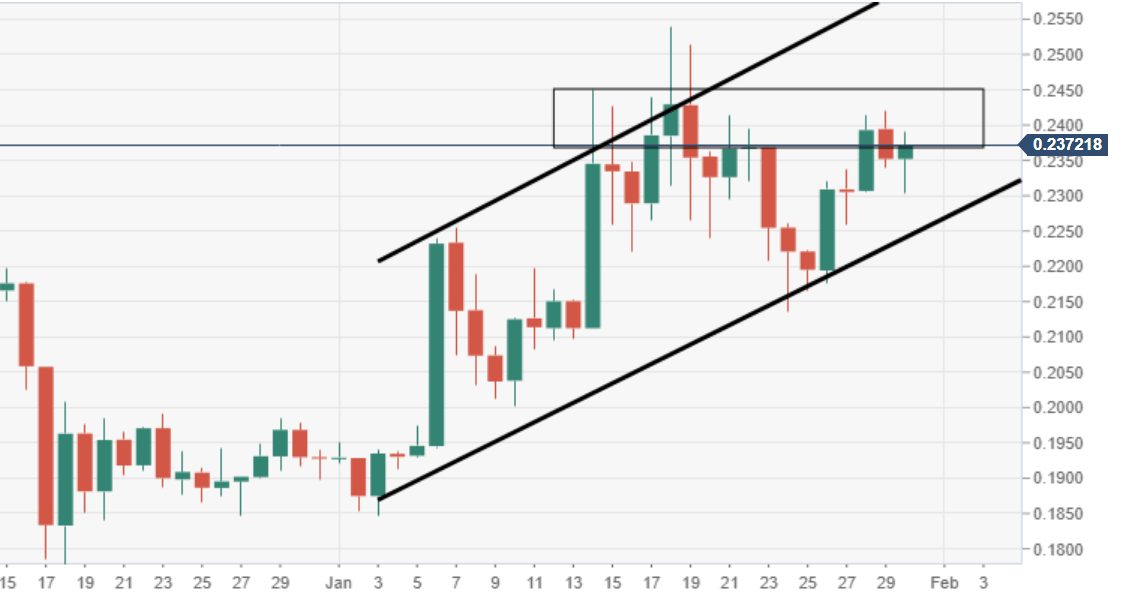 January 31 saw XRP opening at $0,243390, continuing to ride the bullish momentum of the previous day.

The coin’s price is still in a steady uptrend, with traders still hopeful that the rise will continue to $0.3000.

But soon after this uptick, XRP started correcting back to the $0.2440 level. The price continued to decline steadily in the past few hours, and as of now, it is trading at $0.251454.

The crucial support is set at $0.2350 level, and if the price dips below such value, XRP might have issues rebounding to positive prices.

WalletInvestor’s pivot, resistance, and support levels for XRP are:

A few days ago, it was announced that marketplace goLance will be using XRP as payment on its global network of 500,000 users. The company officially released its Ripple’s XRP-based cross-border payments platform called On-Demand Liquidity.

“I get on planes to places like the Philippines and meet these people face-to-face. That’s helped me see first-hand why freelancers are hyper-sensitive about the cost and time it takes to be paid. RippleNet’s On-Demand Liquidity gives us the ability to make hyper-efficient, low-cost payments that make our customers happy and drive growth for our business.” – said goLance CEO, Michael Brooks.

But Ripple also had some bad news this month as Wietse Wind, the developer of defunct projects XRPTipbot and sms.xrptext.com, revealed that his XRPtext project (which enables XRP users to deposit, withdraw or send funds in the crypto via phone number) will be also shutting down by the end of next month. The closure was allegedly because of regulatory issues. But on the upside, Wietse Wind is now the lead developer of another Ripple’s initiative, the Xumm application. The app is based on Ripple’s native token XRP, designed to access banking financial services without third party mediation.

In the media, Ben Askren, former UFC fighter, has expressed his skepticism towards XRP in a tweet posted on Jan. 28: “I think XRP is a scam.” The Twitter community quickly expressed their negative concerns regarding XRP, with the tweet amassing over 2,000 likes.

Various sites have made their own XRP price prediction for February 2020, so we decided to incorporate some of the most relevant ones to better portray market sentiment.

Longforecast predicted that XRP will change hands at $0.24 when February starts. They predicted that the possible maximum price could reach $0.29, with a minimum price of $0.22. The month’s average price was established at around $0.26. The closing price of the month was estimated at $0.27, change for February 12.5%.

Digitalcoinprice has a bullish XRP price prediction for February, foreseeing a price of $0.43872647, which signifies a growth of 83.35 %.

WalletInvestor made predictions for the first ten days of February, along with the minimum and maximum values of each particular day.

30rates made an XRP price prediction for every day of February (except weekends), with the minimum, maximum, and closing prices for each day.

With this, we conclude our Ripple price prediction for February 2020. We hope that the information will be helpful in your upcoming XRP trading endeavors.