Bitcoin logged its best daily performance in more than a month this Monday as it traded in tandem with traditional markets.

The benchmark cryptocurrency closed the New York session 3.32 percent higher at circa $10,679. The gains appeared as buy liquidations–a bet against short-sellers–on crypto derivatives exchange BitMEX outran sell liquidations by more than double. That partially helped BTC/USD in rising above $10,700.

An uptick in bullish positions, meanwhile, took cues from macroeconomic narratives. Three different bullish catalysts played out in sync to help Bitcoin rise. The first of them was and remained the Federal Open Market Committee’s Wednesday meeting on inflation.

Meanwhile, the second and the third catalyst were a rebounding US stock market and a weakening US dollar, respectively.

The Federal Reserve officials will meet for the first time since their chairman, Jerome Powell, committed to tolerating higher inflation during his speech at the virtual Jackson Hole economic symposium. Traders and market participants are watching the outcome of this meeting to gain more insights on how the Fed would achieve inflation above its 2 percent target.

One of the most drastic changes in the Fed’s monetary policy that needs more clarity concerns a so-called ‘dot plot.’ The US central bank uses it to signal its expectations of future rate changes. This graphic will indicate just how much each Fed official thinks would cost to borrow money in the future.

It appears that investors, especially in the Bitcoin sector, are already anticipating a dovish approach by the Fed. The cryptocurrency has built on its Monday performance after a steady rise on Tuesday. At its intraday high, the bids for BTC/USD was near $10,830. 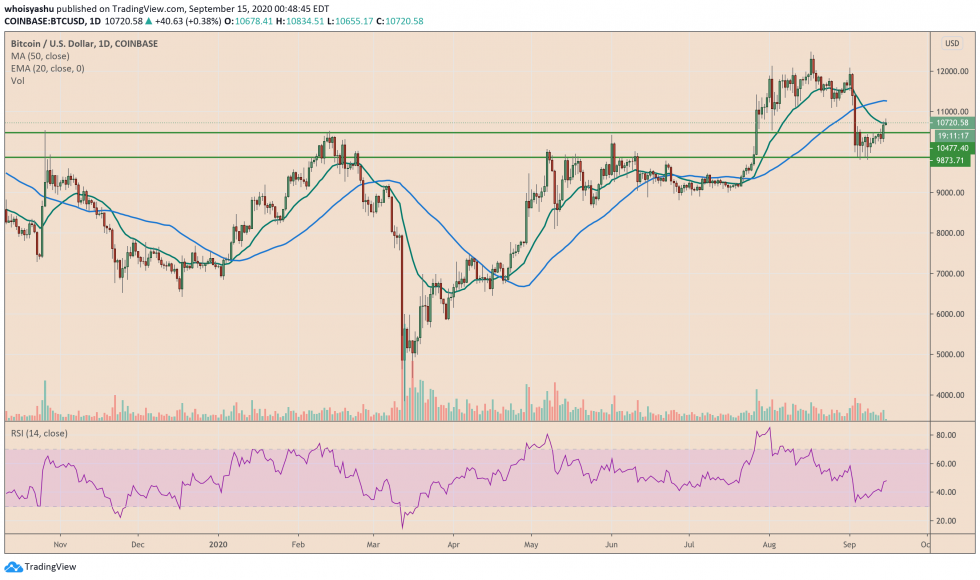 BTC/USD eyes a retest of $11,000 ahead of Wednesday’s FOMC. Source: TradingView.com

The continuation in the uptrend has brought older resistance levels back in the view. Josh Rager, the founder of BlockRoots.com, said Monday that he sees BTC/USD hitting $11,900 should it stay above the $10,173-level. The pair is worth much more at the time of this writing.

The prospects of an extended bullish momentum in the Bitcoin market also appears as the US dollar index weakens. The DXY continues to print bearish continuation signals as investors shift back into riskier assets ahead of the Wednesday’s FOMC. 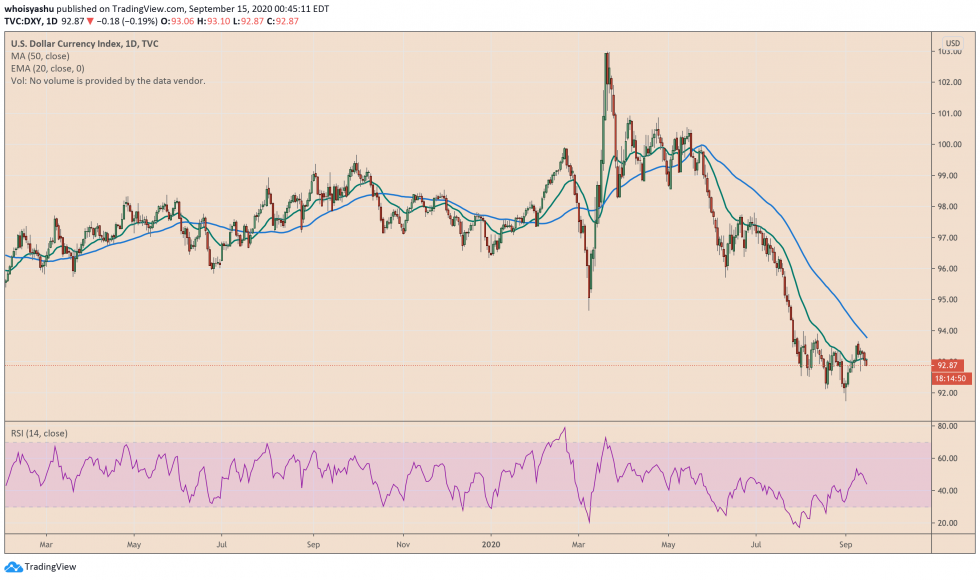 DXY has plunged 0.84 percent from its session top. Source: TradingView.com

Bitcoin and DXY have shown an inverse correlation since the March 2020 rout. Therefore, any plunge in the greenback points to a more bullish BTC/USD.

Meanwhile, some traders are still anticipating a pullback move. One of them noted that the area above $10,700 has a comparatively higher selling sentiment that risks BTC/USD correcting lower. In his Tuesday analysis, the analyst noted that the pair could still fall below $10,000.

$BTC prediction now approaching some resistance. This is where we’ll see if it’s got the strength to continue or drops back down. pic.twitter.com/G7xp1ynwTf

Fundamentally, BTC/USD looked stronger at least until the conclusion of Wednesday’s FOMC.